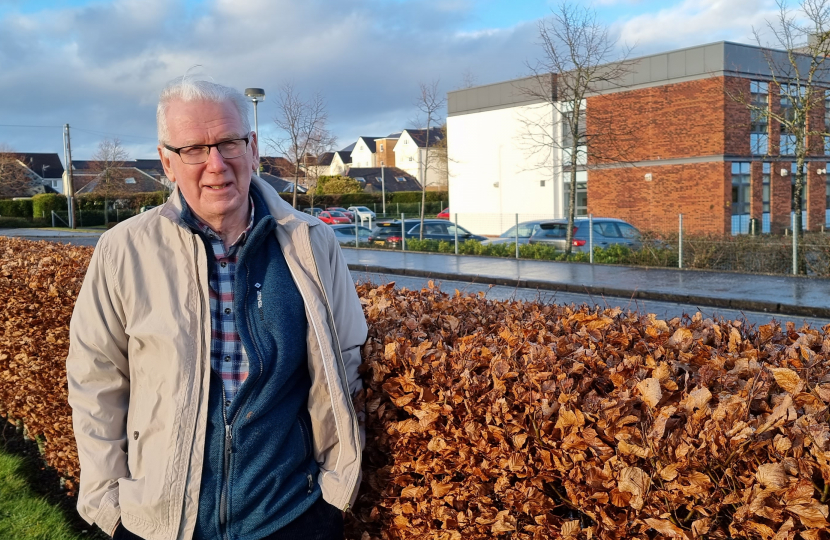 Alastair Pettigrew writes about the need to get Stirling cleaned up and how the neglect of the SNP/Labour administration is affecting us all.

Alastair was an ear, nose and throat specialist at Stirling Royal Infirmary. His innovative 3d ear model is still in use to train surgeons worldwide. He is also a great Scottish Country Dancer and fiddle player. He has lived in Stirling for 42 years and is keen to get Stirling Council sorted and bring his experience to the table.

Looking around Stirling City centre there is ugliness that assaults the eyes. For instance, the raised plant beds at the entrance to the Thistle centre have had no plants in them for months, only bare earth decorated with cigarette ends. Does the SNP/Labour council not think that plant beds ought to have plants in them? This is a key spot in the centre and surely a little winter greenery or now that spring is sprung some most welcome flowering bulbs would not break the bank. Why are these plant beds neglected? Is it because  some members of the public abuse them, I hardly think so. If indeed that is the case then surely it would be better to remove the beds entirely.

And in the same area why is it when the granite paving is removed to repair underground piping are the granite paving stones not replaced but instead the deficit is filled with tar macadam. Similarly at the top of the town on Broad St the historic cobbles have not been replaced in the centre of the street but instead we have to tolerate a great black scar of tar macadam. As my mother used to tell me, “If a job is worth doing it is worth doing well.”

Wandering around the centre we seem to have “thing” about bins. They are everywhere, grey, black, blue and green some overflowing some not, every alley festooned with them every nook and cranny is considered an ideal spot to park a bin. Some are dirty and smelly, usually  outside a restaurant, some are surrounded by piles of neatly tied rubbish bags. Is there not a better way to deal with our rubbish? In continental cities there does not seem to be this mania for bins on public display. Perhaps a few larger bins discretely sited and that are emptied at least once a day might be an option.

If one raises ones eyes above bin level there is still much that offends. In Scotland it rains and our gutters and down pipes have a lot of work to do. Why is it so many are leaking? This disfigures the stonework with damp patches, green algae, the growth of bushes and rotting of the internal wood of the building. I know some of these buildings will be privately owned but surely the council has some ability to cox or coerce the owners to maintain the facades. The decrepit appearance of the buildings sends the message that Stirling has lost its self respect and doesn’t care what the world thinks of it.

Throughout the Stirling area I have noticed that road markings are faded. Not only is this unsafe but it gives a tired, worn out, threadbare appearance to the City and the County. This coupled with dirty unwashed directional road signs give the signal that Stirling is past its best. Surely Stirling can put on a little “make-up.”  Maybe not lipstick but a cleaning mop to the signs and white paint to the road markings would work wonders. Then we can all feel better about Stirling and ourselves. A Conservative council will restore Stirling’s pride in itself.

This year's Council elections are a chance for Stirling to get rid of the SNP/Labour administration which has sleepwalked through the last 5 years it's had to try to improve our communities.