The Facts on Bin Collection 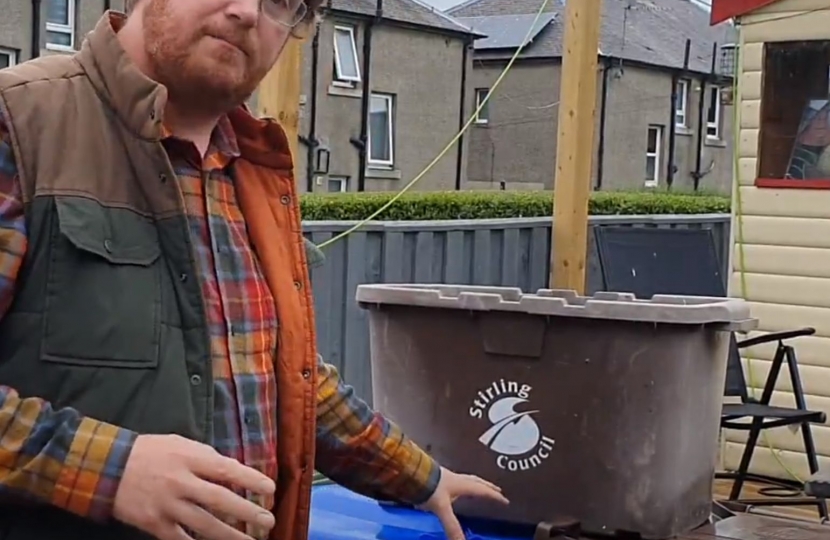 Trying to plug every line that the SNP are putting out in defence of their ridiculous bin policy which they forced through on the 30th June is difficult. Their party propaganda machine goes into overdrive.

Let me try and deal with some of the issues here. Sorry this is a bit long and detailed, but we have spent quite a bit of time trying to put the case together and the SNP have ignored every argument against this.

Let us know what you think about this. Email your local councillor and tell them.

We could raise taxes. A 1.5% increase would cover these costs. Given taxes have gone up by almost 15% since they came to power, it hardly seems fair. We could make the service more efficient and copy what is done in other authorities.

Full details of the extra financial statements are attached to this item.

There are two types of bins, comb lift (which are the current green and blue bins) and Diamond lift (which are the current brown and grey bins). The Diamond Bin connection was bought many years ago when the council was sorting recycling at the side of the road on the big flatbed trucks, a system which came in before 2007. This system was not adopted widely and the Council is left with a legacy system. It’s a bit like if the Council had bought Betamax videos or HD DVD. Effectively we are stuck with an old system that nobody else is using and it is increasingly expensive to service. At the time any questions were asked about this, but the then Labour administration carried on regardless.

The problems arise when you add in the fact that the administration want to borrow £1.8m to pay for the new types of bins. New bins would help with the overspend as the service could use the same type of bin lorry for every house in Stirling (they currently use an adaptor type thing to make this work). This borrowing adds an additional £180,000 (to pay back the debt and deal with the interest) per year operating cost to the service. If left unchecked this would raise the overspend to £780,000.

We could just buy them without borrowing, but we would have to cancel something else from the capital programme. Cancelling the Viewforth Link Road would allow us to pay for this easily, as would using some of the underspends from the fact that we can’t do stuff this year due to coronavirus.

Of course the biggest problem is that according to the Improvement Service (a national agency made up of local councils), Stirling Council spends £123 per house in Stirling, as opposed to £67.20 which is the Scottish Average. This is quite a shocking figure, especially when you look at the data in detail. Most local authorities are near the average, in fact the second highest figure is Glasgow City Council which is £99 per house. When you look at that figure and think about how many of these authorities collect waste every two weeks and manage to keep costs low, it begs the question what is wrong with Stirling.

To say it is impossible to get the overspend down is not right, it’s just that the don’t want to do the hard work that would be required to get there. We would have to reroute the vehicles, cut down on overtime, renegotiate the leases for the vehicles (or buy them, whichever is cheaper), renegotiate where our waste goes, reduce overheads, try to do something about the debt level in the service and really get to grips with the finances. The SNP have never been willing to do this.

Furthermore there are more efficiencies to be had across the Council. Did you know that since the SNP came to power the number of people paid over £50,000 per year has doubled? That is a fact that they do not want to address.

You can see the details of what happens at every local authority in Scotland in the attached PDF.

The local government benchmarking framework can be found here:

No assessment has been done on the Stirling system. Surely this should have been done before the changes were agreed.

While many people with young children will be very happy to receive a special uplift, I am not so sure that people who have incontinence issues will be happy putting a special bag out or having a sticker slapped on their bin. It’s a bit of an assault on personal dignity and will also require them to register with the council.

They have also not said who will be eligible for special support and it strikes me that doing an individual assessment of every household in Stirling will be a time consuming and expensive process. As well as that people will have to tell the Council far more about their personal circumstances than they might want to.

The deposit return scheme is coming in 2022 . Predictions are one thing, but wouldn’t it be more prudent to make sure the system is working before dropping the system. The new deposit return scheme is exceptionally complex and will take ages to get up and running. No government has a great record of implementing changes of this magnitude smoothly and without any problems, so it would be better to be take care.

This is a tax, pure and simple. It’s a fairly regressive tax which does not reflect anyone’s income, household size or ability to pay. In effect those with large gardens will be far more able to avoid the fee than those with small gardens because they can compost. If you have a small or shared garden you probably don’t have much choice than to pay the fee.

It is £35 now, but remember these fees get reviewed every year and fees generally get increased.

Concessionary schemes are generally complex and hard to administer and so it is likely that this will be pegged to some other benefit or assessment. That means a huge chunk of people will be missed by their concessionary scheme.

Stirling has a very good record of recycling. Only one other local authority in Scotland has this system running at the moment and they saw a significant increase in their recycling rate. That was, however, starting from a much lower base. Again, looking at the local government benchmarking data, Stirling recycles 54% of it’s waste compared to a Scottish Average of 45%. Falkirk, with its 4 weekly collection rate only recycles 50.1% of it’s waste. Can we realistically expect a much higher rate here in Stirling?

Is this better for the environment?

In all fairness it probably is. There might be a reduction in the amount of waste being sent to landfill, but the biggest improvement for the environment is likely to be the fact that we aren’t sending bucket motors back and forward to every house in the district every two weeks. It will use less petrol and have a reduction in the amount of carbon emissions the council makes. Does that make up for the service reductions and all the other problems this will cause? I don’t think so.

Sheffield Council brought in an electric bin lorry last year. I’m not sure if we could get one of these that would get all the way out to Inversnaid and back on a single charge yet, but the technology is getting better all the time. Perhaps a hybrid system would work well. Let’s look at that, but not try and dress up a financial and service cut as an environmental benefit.