A bad weekend for Stirling SNP 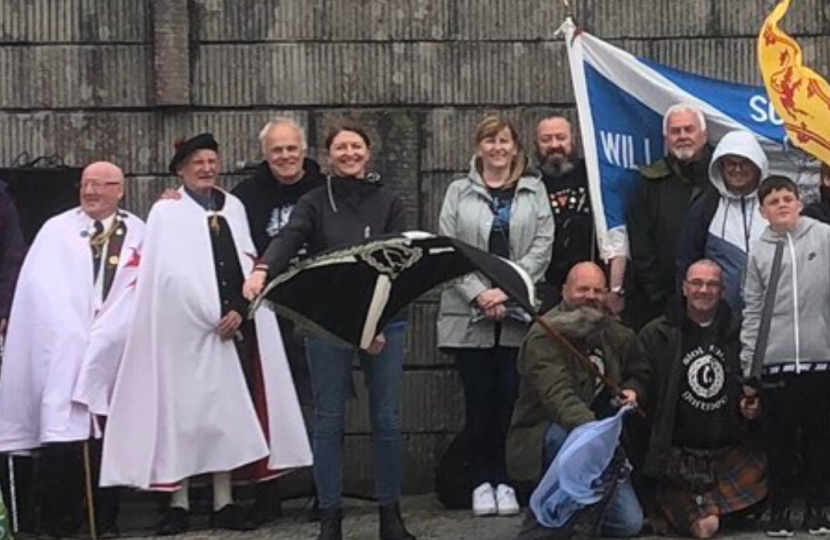 The weekend of the 25th and 26th of June perhaps gave an insight to how Stirling SNP truly think.

On the 25th, Stirling played host to the All Under One Banner march, a semi regular event that sees many Nationalists march to Bannockburn through the busy Stirling City Centre, as well as through the Torbrex and St Ninians. These are two areas with many older more vulnerable people.

It was therefore quite disgusting to hear chants of "Tory Scum" reverberating off the proud stone walls of Stirling, shouted by an angry-sounding ruck of men.

It was with this march and while hearing this chant that Stirling's MP Alyn Smith said that there was a "Great Atmosphere". He went on to address the same crowd as they coagulated at the Battle of Bannockburn site, claiming that the SNP won the recent local elections (interesting claim given they were removed from administration) and additionally claiming he was speaking from "Bannockburn ward". He was half a city away from said ward!

On winning election, Alyn Smith said he would work to represent all Stirling residents. Cheering on a "Tory Scum" shouting crowd, and even failing to at least condemn the chants, isn't really keeping that promise. He could at least invest in a Stirling A-Z.

If this wasn't bad enough, Evelyn Tweed, MSP for Stirling, then decided to take members of Bannockburn SNP including Bannockburn's SNP Cllr Brian Hambly to a photo-op with members of the ethnic nationalist group Siol Nan Gaidheal. Her photo, posted proudly on her Twitter account, showed her with members of the extreme group, and going so far as to hold one of their flags.

When called out, she rapidly took the tweet down and apologised, claiming she didn't know what the flags meant. Aside from the idea of holding a flag which represents something you're not aware of, it seems dubious that any member of Stirling SNP isn't aware of Siol Nan Gaidheal.

This group have been very active, "Protesting" outside Stephen Kerr's office while he was MP with a "Tory Scum Out" banner as one example. Interestingly this banner also made an appearance at the 2018 All Under One Banner march, joined by then SNP MSP Bruce Crawford and SNP MSP Keith Brown among others. We didn't hear condemnation of it from them then either.

Stirling SNP reacted to this banner when shown outside Kerr's office, saying:

"Ultra–nationalist views are not compatible with the inclusive society we live in and these methods of political action are deplorable."

The banner was also unfurled by Siol Nan Gaidheal at the SNP's protest against Theresa May's visit to Stirling in 2019. Again the SNP claimed it was nothing to do with them.

In short, Stirling SNP and Siol Nan Gaidheal are well-acquainted. The idea that any member of the Stirling SNP, particularly someone who was a Cllr for 5 years and now the MSP, doesn't know who they are- that's either stupidity, ignorance, or something far worse.

We will complain to Stirling Council about the presence of this group and the chants.